In 1949, The National Mental Health Association declared May as Mental Health Month. Although this nationally recognized observance began as Mental Health Week, with an increase in public interest and a broadening scope of issues, it grew into a month-long awareness campaign.

1950s-60s: Through the next 2 decades, special emphasis was placed on educating the public around mental illness and inviting them to state hospitals and other locations to learn more.  In the late 1960s, this national observance was expanded to become May is Mental Health Month to bring greater awareness to the importance of mental health care.

In 1996, PPAL launched the first Children’s Mental Health Week in Massachusetts.  Its theme was “One Youth At A Time” and included posters and a toolkit, as well as public service announcements. The campaign has grown each year since.

In 2007, the National Federation of Families for Children’s Mental Health launched the Annual Green Ribbon Campaign, one of their most important awareness and education campaigns.  The green ribbon is a key symbol in social marketing and awareness efforts.  It is an uplifting campaign while also spreading awareness and serving to spread awareness through positive public health promotion efforts and to begin dialogue throughout communities nationally and internationally.

In May 2012, SAMHSA established the first National Prevention Week to prevent substance abuse and promote mental, emotional and behavioral health and well-being as well as raising awareness in youth and young adults.

Today, the goal of this nationally recognized event is to increase public awareness and educate communities to expand the understanding of children’s mental health needs and their resulting impact on families. 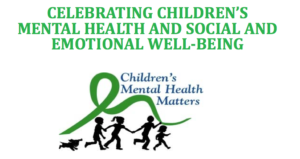